Prancer in the Park Kicks off Christmas in Style

2015’s Prancer in the Park got everyone in the Christmas spirit whilst taking part in some fun filled exercise.

Around 100 people met at Horsforth Hall Park in Leeds, dressed in their finest Christmas outfits to complete a short running course with some surprises along the way.

Horsforth Hall Cricket Club opened their doors so those doing the 3 laps of the park could socialise afterwards with a hot drink and a bite to eat.

Organiser Rich Sadler, Sports Activator at West Yorkshire Sport, along with the many volunteers from Leeds City Council, Run Leeds and British Orienteering made sure the event could go ahead.

Today’s about giving people that awareness of the facilities that they can come and use. We are just trying to get as many people active as we can

The run around the park was not only a chance to have some family fun, but so those in the local community could hear about a brand new running group. In the New Year an adult social exercise group will be starting up where the event took place.

The new group will be for beginners wanting to get into exercising or those who haven’t exercised for a while and are keen to get back into it.

We wanted to do something as a family. I already do some running, but I think the idea of having families down all together is a great idea for the local community 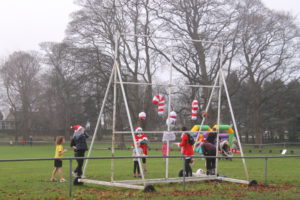 Christmas carolling, piñata hitting and festive treasure hunts were just some of the tasks for the children at different parts of the course. 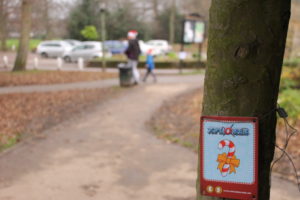 It was really fun, there was a treasure hunt for my dad and younger brother to do. Then me and my mum got to do the run together

The free to enter event was all about having fun, with the hope that the enjoyment would encourage the children to get active if they weren’t already.

We as a family always like to do a run at Christmas and decided to give Prancer in the Park a go. “We’ve done other stuff in Leeds, at Roundhay Park and places like that but today was a lot of fun with the bouncy castle, it’s great for the kids

The distance was another good thing, it was just right as you don’t want it to be too long for the children

The new beginner running group will be commencing in January, with the cricket club as the base. Keep your eyes peeled on the Run Leeds site for more information soon!