It’s fair to say my running journey has been somewhat “complicated”. I started taking a real interest in running when I was about 16 and went running with my mum after college and during weekends. I was used to entering 5k race for life events but never really challenged myself to run competitively.

I continued running whilst at university (a free exercise option – great for students!) and encourage my housemate to start running with me. I was using gym workouts to work on my speed on the treadmill then running longer distances outside. I was in my element! During the summer of my final year, I was working as a sports coach in America when I started feeling very unwell. It took almost 2 years of tests and hospital admissions before I was diagnosed with a virus that hadn’t been previously detected. Ultimately my running and all other forms of exercise suffered whilst I was on heavy medication and constantly felt run down.

When I finally started recovering I was living with a friend who suddenly decided to enter a half marathon – she’d never been a runner and asked me to train her (in just 5 months!). I was nervous about running properly again but soon found myself committed to running longer distances more frequently and decided to enter my first 10k race. I already had the running bug instilled in me, but it was not until this point I realised my potential when I finished with a surprisingly good time. 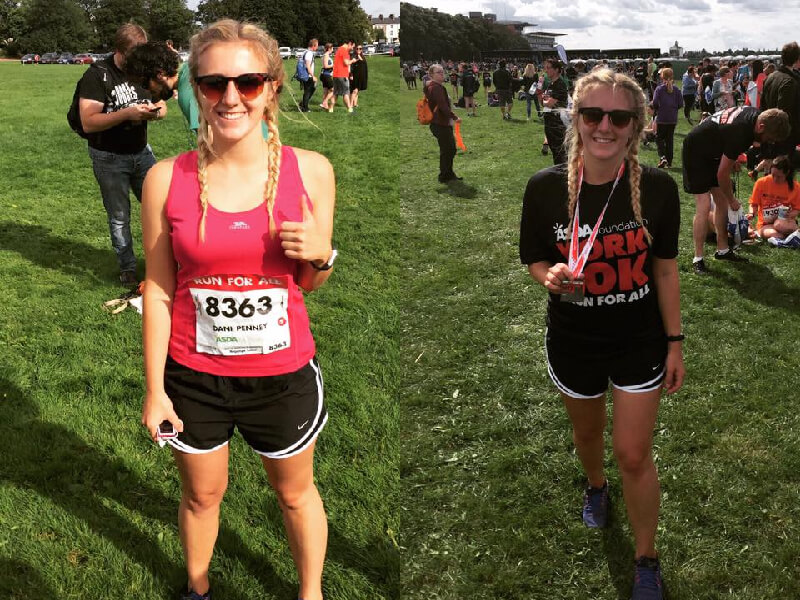 That year I continued entering 10k races and training with my friend – before long we were running 11 miles routes after work! I got my mind set on entering a half marathon (something I thought I would NEVER want to do) and was due to race in September 2017 but was unfortunately struck down with glandular fever just two weeks before… I never ran that race.

After almost a year I was still struggling with energy levels and found that even a short walk could knock me fore six. In July 2019 I plucked up the courage to enter a local 10k race in the hope that it would encourage me to pick up running again. I ran the race, but it was extremely tough. I then took part in a second 10k challenge with the fabulous Leeds Girls Can Ambassadors, which was focused on promoting body positivity as opposed to the running. It was amazing but boy did I suffer afterwards. It took months before I attempted running again.

Around Christmas I decided the best thing would be to put it completely out of my mind. I was feeling constantly drained, tired and had muscle soreness. I took another round of tests and scans at the doctors and in March 2020 I was diagnosed with a vitamin D deficiency. I felt relieved that it explained the tiredness without it being anything sinister!

I had just about given up on my love for running when we entered lock-down and two of my amazing friends suggested starting a virtual Couch to 5K programme. I felt a little sceptical about completing the 9-week programme but knew I would have support around me (virtually) so gave it a go. For the first 5 weeks we used the House Party App so we could see/speak to each other whilst completing our runs at the same time. Time flew by and we laughed, ranted and puffed our way through each session feeling prouder after each one.

Despite a recent bout of Sinusitis and more antibiotics (yes, I know, what are we going to do with me!?) I am determined to complete the programme in two weeks’ time. I am currently walking whilst my friends run but plan to give running a go again next week. We now do a joint call so that it’s easier to run with our phone in our pocket but knowing there are two other people on the end of the phone giving constant motivation really does work wonders. It’s also a great chance to stay connected 3 times a week!

I would never have thought technology would be the driver for returning to running but boy am I grateful for it!

Moral of the story is – never give up! 😊